The Need for a Sewerage System

human wastes. The first organised disposal system consisted of the cesspits being emptied at night, and the waste being carted to a disposal area where it was buried.

The cesspit system was unsanitary and contributed to the spread of diseases such as typhoid. Leakage from the pits could easily enter subsurface water, and since the town's water supply system comprised mainly wells and bores, this contaminated the drinking water. Cesspits were therefore gradually replaced by "earth closets" and fully sealed pans. These were emptied more frequently than the cesspits, and "night carts" became a regular feature of life in the town.

In recent years, with increasing awareness of sewage system effects on the environment, technology has advanced with the introduction of reticulated pipework systems collecting sewage from both domestic and industrial sources, transfer of collected sewerage to a central treatment facility, and state of the art treatment technology to ensure that discharges to streams and disposal of by-product wastes do not threaten the environment.

To comply with good environmental practices and EPA requirements, sewage effluent is required to be disinfected to

kill disease-causing micro organisms that the effluent may contain. The method commonly adopted for disinfection of sewage effluent is injection of chlorine to kill bacteria. As an alternative to chlorination, Ultraviolet irradiation is effective in killing all types of bacteria and viruses.

The advantages of UV disinfection include ready automation, no dangerous chemical handling, short retention time, low maintenance and no ill effect from overdoses. As part of the construction works associated with the two 17,500 EP IDEA Bio-P tanks, a fully automated UV plant was constructed to disinfect all sewage effluent prior to discharge to the Macquarie River.

In 1997, CRC for Waste Management and Pollution Control (WMPC) Ltd approved a research and development project proposed by the Department of Public Works and Services (DPWSA), Advanced Waste Management Centre (AWMC) of the University of Queensland, DLWC and the CSIRO.

The objective of the project was to develop and demonstrate a cost-effective Biological Nutrient Removal (BNR) retrofitting for intermittent decanted extended aeration (IDEA) plants. Given Bathurst Council's background and experience in trialling IDEA systems with Bio-P removal, the Bathurst Wastewater Treatment Works was chosen as an ideal site for full scale demonstrations. The project is being conducted in two phases, with the first phase comprising intensive sampling and testing to collect background data required for comparing plant performance before and after plant retrofitting.

Results of the intensive testing showed exceptionally low total phosphorus levels in the effluent ranging from 0.14 and 0.22 mg per litre. The second phase was to demonstrate the technology over an extended period and to further optimise the design and operation of the process. Participating Organisations were:

In 1998 this process was expended to full scale with two new 17,500 EP tanks constructed.  They produce very high quality wastewater and are in service today.

Council has constructed an effluent reuse scheme to save using potable (town) water and also save money. The 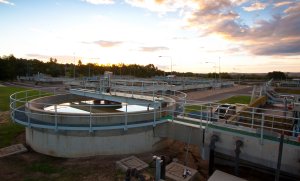 scheme utilises treated effluent, which is pumped through a 10-micron automatic backwash filter then through Ultra Violet disinfection. The effluent is then chlorinated and stored for use as wash down and irrigation water around the site. The systems performance is checked daily for optimum performance.

An additional side stream is further treated through a series of three filters; namely a 30, 5 and 0.5 micron filter with additional UV sterilisation as well. The 5 micron filter is an activated carbon filter, which removes any organics, which may be present. The treated water has been found to be close to meeting the Australian Drinking Water Quality Guidelines.

Biosolids generated at the Wastewater Treatment Works are transported to "Willow Vale" at Evans Plains.

The owners of this property beneficially reuse this product on the property, improving soil structure, moisture holding capacity, crop yields and crop quality. It has also been successfully used to rehabilitate eroded areas. The biosolids have greatly improved the soil structure, increased the level of organics in the soil, improved crop yields and provided a return to the environment.