Testing the liquid discharge from the existing aeration tanks has shown that, under the right conditions, bacteria

which can take up large amounts of phosphorus can be encouraged to grow in the treatment tank.

To view the the diagram of wastewater of the Bathurst Regional area, please click here.

A pilot plant run at Bathurst from 1990 to 1993 proved that by cultivating these bacteria, very low levels of phosphorus can be achieved in the effluent. To prove the theory and develop the technology, the original "Bathurst Box" was converted into a full-scale trial plant. A number of extra chambers constructed in front of the existing tank allow oxygen in the sewerage to be severely reduced. Mixing fresh sewage with recycled fluid from the aeration tank in this environment encourages the presence of phosphorus-hungry bacteria.

The sewerage is than passed through the aerated zone, where bacteria multiply in the presence of oxygen, using large amounts of phosphorus. The normal nitrogen conversion processes also takes place and the sludge when settled and removed is rich in phosphorus. Large proportions of both nutrients are removed by natural processes from liquid effluent, without the use of costly chemicals. The speeds and operating times of the electrical motors driving the aerators, pumps and decant trough are adjustable, which allows fine tuning of the process to achieve optimum performance.

An additional sedimentation tank was built as part of the trial plant. This allows raw sewage to be stored and partially fermented to reduce the oxygen content of the sewage before it is discharged to the inlet chambers. This assists the start of the Bio-P removal process. As a result of increased nutrient removal larger quantities of sludge are required to be removed.

To facilitate handling and removal, a sludge dewatering belt press was constructed to reduce wet sludge to a 'cake' which contains approximately 14% solids. This 'cake' is then transported off site for disposal. The trial plant is world first. Its great advantage is that it does not need separate settling tanks, as required by other Bio-P processes developed elsewhere. Additionally, existing intermittent extended aeration units, which are common throughout NSW, can be simply converted at a low cost.

Following successful completion of the trial plant, two 17,500 EP IDEA Bio-P tanks were constructed and commissioned in 1998, complete with upgraded inlet works, new effluent ponds and a UV plant for disinfection of effluent prior to discharge to the Macquarie River.

Sewage contains varying quantities of floating and suspended solids, some of considerable size. Materials such as rags, pieces of wood, metal, plastic, or rubble enter sewers and eventually reach the treatment plant. 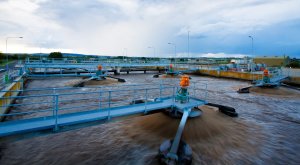 equipment. In 1998, following commissioning of the two 17,500 EP IDEA Bio-P tanks, upgrading works were carried out with the replacement of the inlet works screens to further improve the performance of the treatment plant.

Two new "step screens" were installed complete with screening, washing and dewatering facilities. In 2001 a new grit removal system was installed to remove and wash fine particles, sand and grit. This also assists in improving the efficiency of the remainder of the treatment process.

During the 1970's the Public Works Department was experimenting with an "intermittently decanted extended aeration" process. Bathurst City Council agreed to participate in the experiment and the prototype of a 4,000 person treatment unit was built at the sewerage treatment plant.

The process became known as the "Bathurst Box". The advantage of the intermittent aeration process is that  sewerage which has simply been screened for rags and had grit removed, can be biologically stabilised and the solids settled in a single tank. There is no need for separate settling tanks. Periodic aeration of the sewage encourages the growth of bacteria which break down the organic material to produce water, new cells and inoffensive byproducts such as water carbon dioxide and nitrate salts.

The aeration is stopped regularly, and the sludge and micro organisms settle so that when a trough is lowered into the tank contents, it "decants" clear, treated liquid. One added advantage of stopping the aeration is that it promotes certain bacteria which convert nitrates into nitrogen gas, so that the nutrient nitrogen is largely removed from the sewage. The sludge is pumped out periodically to retain the ideal proportions of raw sewage and active bacteria. Effluent from the tanks is disinfected in shallow ponds. Four extra units were built in 1982.

These units incorporated "diffused aeration" systems in lieu of surface aeration units, which forced air through tiny holes in pipes laid on the bottom of the tanks. The process removes 90% or more of the solids and organic matter from the raw sewerage. It also reduces the content of undesirable nutrients, including nitrogen and phosphorus, which encourage the growth of algae in the water downstream of the discharge point.

The problem of disposing of sludge produced by the plant increases as the size of the town increases. The old-sand filled drying beds allow water from the sludge to drain away so that the dried sludge can be scraped off the surface. When they became inadequate, they were supplemented by sludge lagoons, which store the sludge while it settles and thickens. The lagoons are drained one at a time to dry and allow removal of sludge. 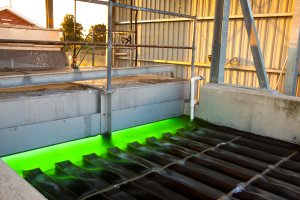 required. In 1998 an alternative sludge handling plant was installed comprising of a sludge dewatering belt press. The belt enables wet sludge to be reduced to a 'cake' which contains approximately 14% solids which can be loaded onto a truck and disposed off site. With increasing volumes of sludge produced from the IDEA Bio-P process, further works were carried out to improve the efficiency and capacity of the sludge handling facilities. These works included: