Water Supply - Where does the Water Come From?

Council's aim is to supply a clean, safe and secure water supply to the people of Bathurst in a way which meets their needs.

This must be done in an efficient, cost effective manner which maximises the potential benefits of the resource and satisfies the needs of the natural ecosystem in an ecologically sustainable way.

Where Does Our Water Come From?
Water for the city of Bathurst is sourced from two dams, Chifley and Winburndale, along with flow from the Fish River.

1.  Chifley Dam
The major water storage for Bathurst is Chifley Dam located on the Campbell's River 17 kilometres upstream of 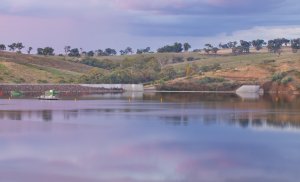 Bathurst. Water released from the dam flows down the Campbells River into the Macquarie River. It is then drawn from the Macquarie to supply Bathurst. Chifley Dam is an earth and rock fill structure. The catchment area is 960 square kilometres, and the dam's capacity with the present wall height is 30,800 million litres.    The earth wall is 455 metres long and 34.4 metres high. It has a concrete side channel spillway on the eastern side of the embankment. There is also a six bay, 172 metre wide emergency spillway excavated into natural material on the western side of the structure, designed to sequentially operate if the side channel spillway cannot cope with high flood flows. 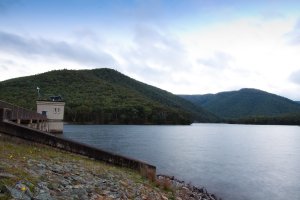 Winburndale Dam is located on the Winburndale Rivulet, 21 kilometres east of Bathurst. Water from the dam is used primarily for park watering and industrial purposes. Water supplied to Bathurst is provided in part, by an old wood stave pipeline between the dam and the city. The dam is a concrete gravity structure, 32 metres long and 22 metres above foundation level at its highest point. The abutments are earth fill, sealed with a thin layer of concrete. The capacity of the dam is estimated at 1,700 million litres, from a catchment area of approximately 88 square kilometres.