Bathurst Regional Council has been successful in receiving funding from the NSW Environmental Trust for a project titled "Restoring Regent Honeyeater Habitat in the Bathurst Region".

The Regent Honeyeater is listed as critically endangered under the NSW Threatened Species Conservation Act, 1995 with estimates of remaining numbers being between 800 and 2,000 birds. The major threat to this bird is the loss of habitat, particularly in open woodland and riparian casuarina forests.

Casuarina Gallery Forest once dominated the banks of the Macquarie River in Bathurst providing habitat for a range of native animals. By 1902 most of these forests had been cleared resulting in destabilisation of the river banks, active erosion and invasion of weeds. In the following decades, Exotic tree species such as willows eventually dominated the river systems to the detriment of native fauna that rely on native forests for their survival.

Council's restoration project will be conducted over three years and will involve weed control, willow removal and planting of a selection of local provenance plant species that are known to be associated with the critically endangered Regent Honeyeater. Works will be based along 1,000 metres of the Macquarie River in the area upstream of Rankens Bridge (Eglinton Bridge).

In addition, the adjoining O'Keefe Park will be planted out with selected local provenance plant species that will, once mature, be used to establish a seed collection area. The seed production area will comprise of a range of plants for both Casuarina Gallery Forest and Box, Gum Grassy Woodland restoration works. When the plants have matured, the seed will be made available for collection and use by local environmental groups as well as for future Council revegetation projects.

The main feature of the seed production area will be a planting of 360 Eucalyptus trees in O'Keefe Park in a grid pattern, making the planting both visually spectacular and easy to maintain.

Regent Honeyeaters feed on the nectar of a range of flowers from Casuarina Gallery Forest and Box, Gum Grassy Woodlands as well as lerps, honeydew and insects. With one of three remaining key breeding sites in the Capertee Valley being less than 50km from Bathurst, it is considered that this habitat replacement project is being undertaken in an ideal location.

Council will be working with Conservation Volunteers to engage community members to become involved in this important project. Community Planting Days will be held in 2016 with volunteers invited to plant a range of native plants to restore Regent Honeyeater Habitat.

Residents and visitors can also get involved in this project by contacting Council's Community Environmental Engagement Officer, Bill Josh on 0407 256 791 who will be regularly working at this site over the coming years. 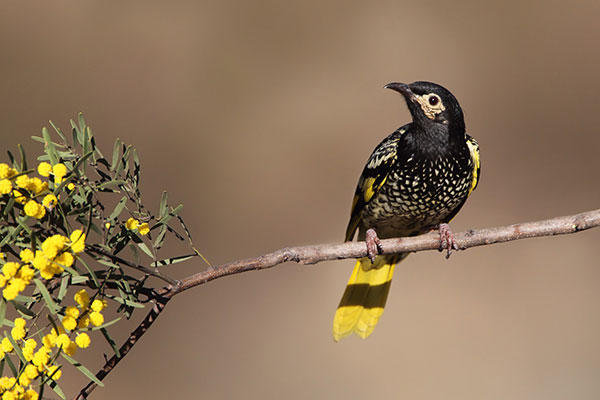