What is a noxious weed?

A noxious weed is a plant that causes or may cause damage to agricultural land, 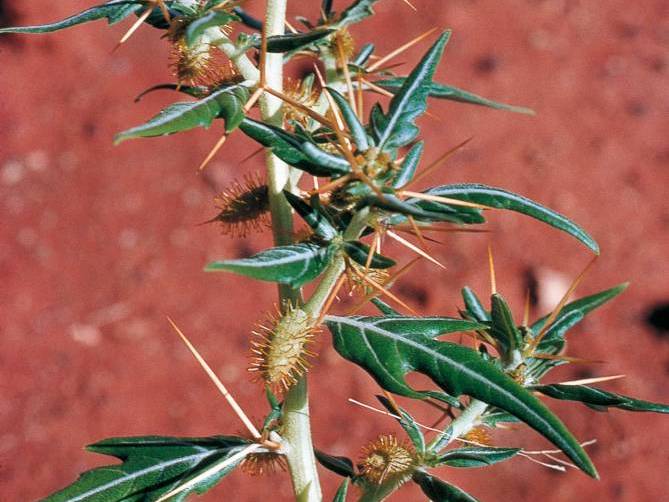 The Bathurst Burr is a Class 4 weed. Photo: NSW DPI the environment, or human health and must be controlled to prevent it spreading.

A plant may be called a weed if it is:

Noxious weeds can cause damage by growing and reproducing to the extent that all native plants are 'choked' out of an area.

The different classes of noxious weeds are defined in the table below, adapted from the Noxious Weeds Act 1993. To see which weeds are declared noxious in the Bathurst region, visit the NSW Department of Primary Industries website, here.

How are noxious weeds controlled?

Control orders describe the extent to which a noxious weed must be managed. This may involve eradicating the plant, or inhibiting the spread of the plant.

The Upper Macquarie County Council (UMCC) is a noxious weeds Council, whose purpose is to control and eradicate noxious weeds in the following areas:

For more information on noxious weed control visit the UMCC Website or call on 6338 2875.

To report noxious weeds in Bathurst Regional Council's parks and gardens, contact the Parks Department on (02) 6333 6285.

In early 2016, an infestation of Elm Leaf Beetle (Xanthogaleruca luteola) was observed on many of Bathurst's mature Elm trees. Elm Leaf Beetles are around 6mm long and yellowish to olive green with black stripes. The beetles hibernate in sheltered places during winter and emerge in spring to feed on young leaves and lay eggs.  The larvae of the beetle hatch shortly after and feed on the leaves throughout summer. Adult beetles eat holes in the leaves, while the larvae skeletonise the leaves of the Elms.

Bathurst Regional Council has implemented an ongoing program to treat the Elms on public land, including parks, road reserves and other open spaces. In 2016, a total of 600 Elms were stem injected with pesticide which will protect the tree against attack for 2-3 years. Council will continue to monitor and retreat the trees as part of an ongoing program.

Council encourages property owners with Elm Trees to control the beetle to limit future infestations. Further information including control measures can be found in the attached brochure, prepared by Friends of the Elms Inc.