Rivers and creeks provide multiple benefits to the environment including many benefits to people. However since European settlement widespread degradation of waterways and their catchments has occurred. All levels of government acknowledge this and there is a range of government and community based programs, policies and planning frameworks which have been specifically developed to address the issue. Council has recognised the need for a local scale plan that complements existing frameworks to assist with rehabilitation/restoration of local waterways.

The project involved an assessment of the current condition of the waterways to provide a baseline condition index against which future trends in waterway health can be assessed. The plan also outlines long term strategies for the management and restoration of these waterways and recommends specific actions to improve their health.

The vision for Bathurst's urban waterways, as identified in the plan is "Waterways for people and wildlife providing environmental and recreational linkages in the Bathurst urban landscape."

The plan was adopted by Council in 2010.

Since the Urban Waterways Management Plan was adopted in 2010, Council has implemented a number of the recommended actions with a particular focus on the rehabilitation of Hawthornden Creek as it was identified in the plan as the highest priority sub-catchment to be targeted for rehabilitation and restoration work.

Mactaggart concluded that as a general observation targeted restoration activities and management practices have had a positive contribution to creek condition. The rates of improvement vary and in some cases have been significant enough to trigger a shift from a degrading state to a recovering state. In other cases the rate of change has been slower. In some cases, despite the best restoration attempts, sites are limited in the degree of improvement due to inherent problems or constraints such as the depth of the gully or location within the built environment.

The full Urban Waterways Assessment Update can be downloaded here.

Since 2011 Council has been progressively implementing the recommendations of the Urban Waterways Management Plan for Hawthornden Creek. The first project was undertaken in the reaches of Hawthornden Creek which lie within Boundary Road Reserve and was developed in collaboration with Boundary Road Reserve Landcare Group. It saw the construction of a series of Schauberger sills within the deeply incised creek channel to stabilise bed erosion.

Schauberger sills are rock structures that act to protect the creek from erosion and help to raise the eroded creek bed. The rock protects the bed and the banks of the creek and the way the sills are designed helps to dissipate the energy of the water as it flows downstream. This reduces the erosive force of the water and reduces the movement of sediment and its impact on stream habitat. The sills also help to create small water pools which also creates new habitat where there was only eroded creek bed.

The project also involved the construction of a rock wall to control a head cut which was progressing along a tributary channel. The project was completed in 2012. 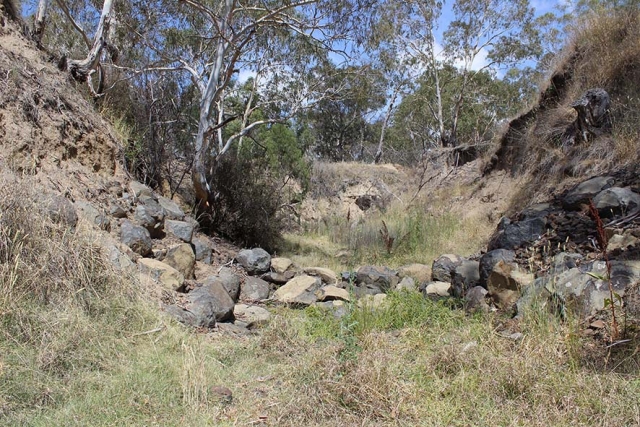 In 2011 Council received Weeds of National Significance funding from the Central West CMA (now Central Tablelands LLS) to remove willow from the reach of Hawthornden Creek within Charles Sturt University. Council’s Engineering staff undertook the willow removal, which was followed by planting of suitable native vegetation in the riparian zone. 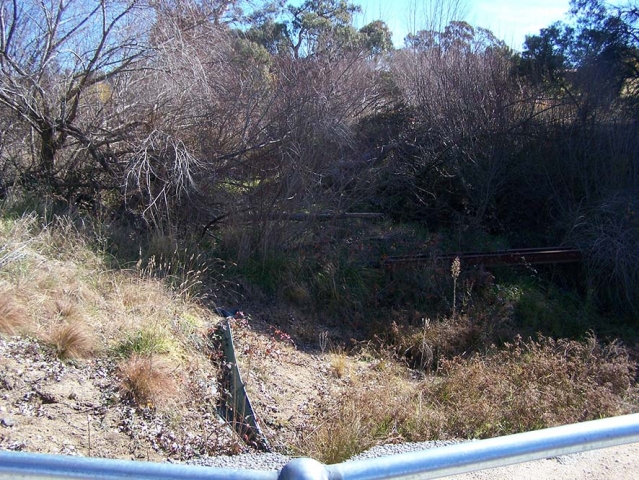 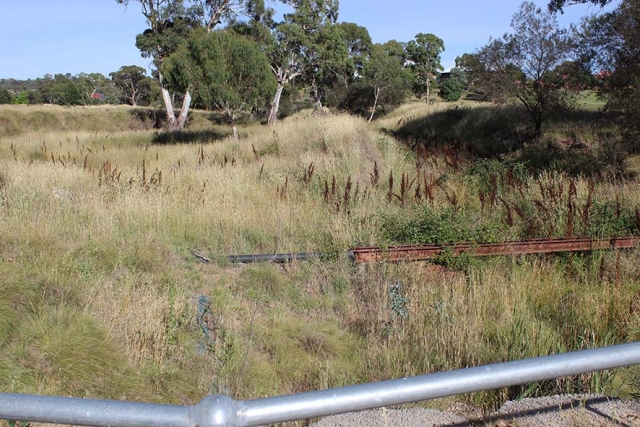 This project was a collaborative project between Bathurst Regional Council and Charles Sturt University undertaken in 2013 which aimed to address major bed and bank erosion within the reaches of Hawthornden Creek which flow through university land. A major head cut had developed which was mobilising massive amounts of sediment and hundreds of tyres into the creek system, causing pollution and threatening downstream aquatic habitat and infrastructure. The head cut was caused by a major rain event in 2010 which resulted in the failure of an old blue stone culvert crossing. This initiated a large head cut in the main trunk of Hawthornden Creek. Over the next two years, the head cut deepened and migrated rapidly upstream causing hundreds of tyres which had been used in historic erosion control efforts to be released into the creek system.

The project involved the installation of a series of rock-drop and bed-control structures and the rock capping of the remaining tyres which were partially or fully embedded in the banks of the creek. Several hundred tyres were removed from the creek, shredded and disposed of to landfill. The project also included the revegetation of the wider riparian zone with Box-Gum Woodland species, helping to link remnants of this Endangered Ecological Communities through the Bathurst urban area and beyond. 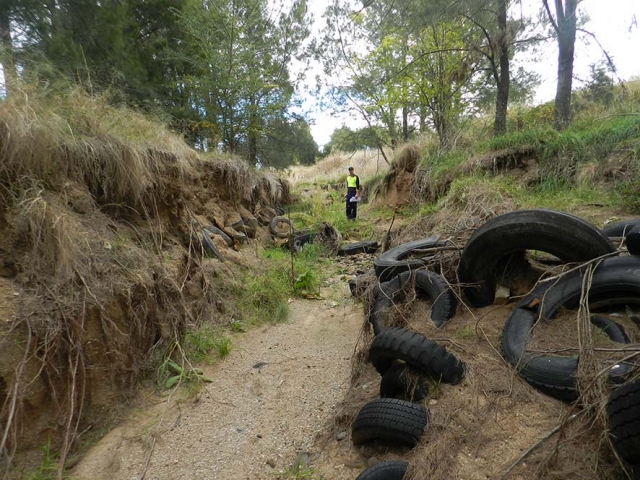 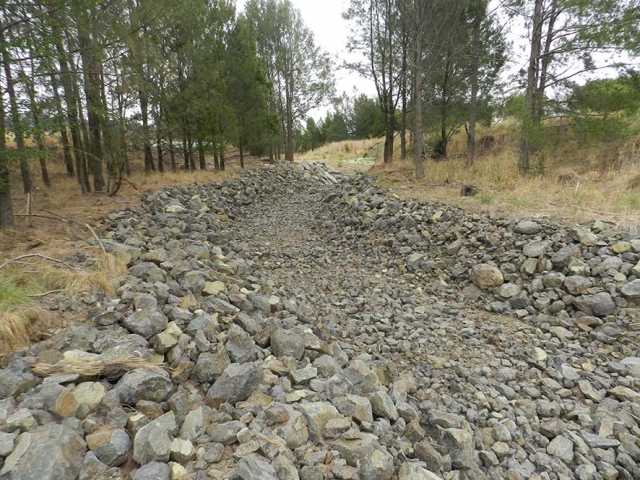 Most recently Council has been working in Jaques Park and Ray Morcom Reserve, installing rock structures to control erosion and improve instream habitat for aquatic animals in Hawthornden Creek. The instream works which were completed 2015 included:

This project was assisted by the NSW Government through its Environmental Trust. 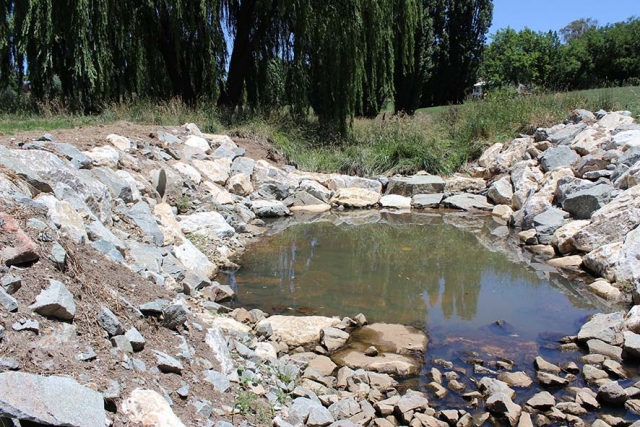 As part of the Stage 3 rehabilitation project, sugar was used as a soil additive in revegetation beds to see if it would assist with the establishment of native plants by suppressing weed competition. The scientific literature shows that soil nitrate can be temporarily reduced by adding sugar or other carbon sources to the soil, which raises the carbon to nitrogen ratio in the soil. This in turn enhances the activity of carbon-limited soil micro-organisms. These microorganisms then compete with plants for available soil nitrogen, potentially giving a competitive advantage to plants adapted to low nutrient environments, including many plants found in Box Gum Woodland, the main naturally occurring vegetation community found in the local area.

Further details of the trials and the results can be downloaded here.