Raw water contains undesirable sediments, colour, algae (which can produce a taste and smell) and other harmful organisms. The Water Filtration Plant (WFP) is designed to remove this undesirable matter, and produce water fit and safe for drinking.

To view the the diagram of filtrated and raw water system of the Bathurst Regional area, please click here. 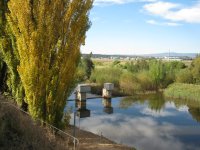 Four 11 metre long pumps installed on a platform beside the river lift raw water up into the WFP. The WFP is designed to remove this undesirable matter, and produce water fit and safe for drinking. The raw water is delivered into a pit chamber or channel where two chemicals are added and the mixture is agitated by a propeller-type 'Flash Mixer'. The chemicals used in raw water include:

PAC can be injected into the water to adsorb odours and toxic compounds produced by the algae. It is then removed by the conventional process. The mixture of water and chemicals is vigorously agitated a second time before being distributed by a channel into one of the three flocculation tanks. Here large horizontal paddles rotate slowly to encourage the floc to form and grow larger.   From the flocculation tanks, the water enters the sedimentation tanks. As it flows slowly down these tanks, the large particles settle to the floor under gravity.

A sludge rake scrapes along the bottom of each of the three sedimentation tanks, collecting the settled sludge and pushing it towards hoppers at one end. From here it is released periodically to the sludge lagoons, which are drained so that 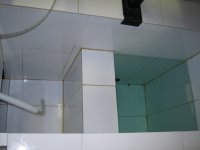 the sludge can be dried and removed. After the heavier floc has settled, the water is passed through sand filters which collect smaller particles. The filters are periodically backwashed by forcing a combination of air and water up through the layers of sand, thus removing the fine material captured by the filters which could clog them. The filtered water drops into underground reinforced concrete clear water tanks, one of which is located under the main building. As it enters these storage tanks, it is treated with chlorine to kill any harmful organisms and with fluoride which aids in the dental health of the community.

From the underground tanks, the water is pumped into the town water supply system. Reservoirs located at high points in the system store the water and balance the usage against the capacity of the pumps. When the pumps are not running, the pressure in the system is maintained by feeding from the reservoirs. The plant has a complex control and monitoring system, allowing equipment to be operated either automatically or manually from a central control area. A telemetry system now complements the original electrical control system.

It exhibits on a computer screen the status of all the equipment in the plant, of the reservoirs and of the pumping 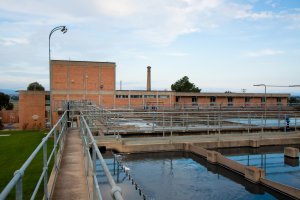 stations. It also allows the plant to be controlled from a remote location, using a portable computer. Alarms are registered at the plant, and are communicated to the operators by pager out of working hours, so that problems are dealt with promptly. A well-equipped laboratory enables constant testing of the raw water and of the treated water delivered to customers. It monitors such things as turbidity, colour and pH.  Operators also do periodic testing for Coliforms or indicator bacteria, and algae identification and counting.

Council, in conjunction with the New South Wales Health Department, conducts a monitoring program to ensure the treated water complies with the Australian Drinking Water Guidelines 2011.   The water tested for a comprehensive range of organic and inorganic analytics monthly and for indicator bacteria weekly.  Any failures to meet the Australian Drinking Water Guideline's result in notification of the Local Health Unit and Council and investigation and remedial action are promptly instigated.