The new system included pumps at the Macquarie River, which were housed in a building still standing on the site of the present Water Treatment Plant. The pumps were run by steam engines, fired by wood or coal. They were used to fill two reservoirs in Piper Street, which fed the town distribution system. The Macquarie River proved an unreliable source of water.

The local press reported that in summer it was prone to become 'completely dry', except for a series of stagnant pools. Trenches were therefore cut through the rock in the river bed to direct the water to the pump well. Attempts were also made to dam the river just downstream, but these measures failed to secure the supply. In 1889, a deep well was sunk into the underlying granite at the pumphouse. On the advice of a Government geologist, tunnels were driven from the well towards the river flats to the east. The tunnels eased the shortage of water considerably, although problems recurred periodically in dry seasons. Extensions to the tunnel system were carried out intermittently until as recently as 1929, when a severe drought prompted further work. The remains of brick air shafts built to service the tunnels are visible on both sides of the river bank near the old pump house.

Construction of a dam on the Winburndale Rivulet commenced in 1931, after extensive and lengthy investigations of possible dam sites. The dam and gravity pipeline to Bathurst were constructed using Unemployment Relief funds provided by the Government. The work provided much-needed jobs between 1931 and 1934, when the Depression was severe. The dam still supplies 'raw' water for park and garden watering, and for some industrial uses. The 21 kilometre long gravitation pipeline from the dam to Bathurst was constructed in 300mm diameter wood stave pipes. These pipes were made of Western Australian jarrah timber slats wrapped with steel bands, and bitumen coated. The system was favoured at the time because it was labour intensive. At the time of construction, it was thought that the life of these pipes would be 20 years, but expectations have been exceeded and sections of the pipeline are still in use. Construction of Ben Chifley Dam commenced in 1948, after detailed investigation of alternative sites, and protracted public debate. The dam was officially opened by the Premier, the Honourable J J Cahill, on 10 November 1956. The dam is an earth and rock-fill gravity structure, with a concrete side channel spillway.

It was built with a view to increasing the wall height and hence the capacity if required in the future. The recent raising of the dam by 5.3 metres takes advantage of this fact. Water is released from the dam into the Campbells River, which when it joins the Fish River, becomes the Macquarie River. The releases maintain a flow in the Macquarie at the site of the Water Filtration Plant, where pumps draw the water from the river. A weir was constructed across the river adjacent to the plant in 1991, in almost the same location as the tunnels of a century earlier. It ensures that there is a permanent pool from which the pumps can extract water for the town.

The present Water Filtration Plant was opened in 1972. It was constructed on the old Water Works site. The 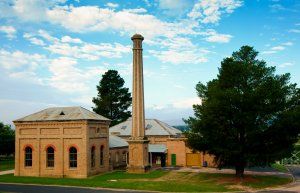 conventional treatment process includes coagulation, flocculation, sedimentation, filtration, disinfection, pH adjustment, fluoridation and is designed to consistently produce water which complies with the Australian Drinking Water Guidelines. Significant upgrading works from 1987 to 1994 increased its treatment capacity from 27 to 60 million litres per day. They have also ensured that better quality water can consistently be supplied. The distribution system, including pipelines and storage reservoirs, has been extended as the town has grown. Roofs have been installed on all the treated water reservoirs to maintain drinking water quality throughout the network. At present there are two independent systems: one for treated water which is used for domestic purposes, and one for "raw" water which is used for watering recreation areas and by industry for processing.