Flying of the Australian National Flag 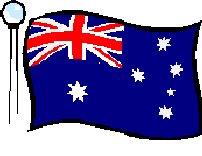 Flags are flown in a half mast position as a sign of mourning.

The flags situated outside the Bathurst Regional Council Civic Centre at 158 Russell Street, Bathurst will fly at half mast on occasions when directed by the appropriate Commonwealth or State Government Department or in accordance with Council Policy.

Examples of these occasions are:-

When lowering the flag from the half mast position, it should first be briefly raised to the top of the flagpole, and then lowered ceremoniously.  A half mast flag should never be flown at night.