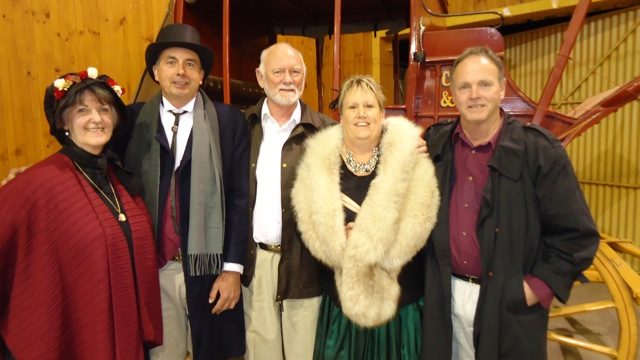 Wendy was given a copy of a family book “Out of Cornwall” the story of Richard and Mary Mutton. The Muttons were Wendy's GGGG Grandparents. This book reignited Wendy's connection with Bathurst.

Wendy and cousin Vicki went to Bathurst in 2006 to follow in the footsteps of the Mutton's. They visited Mutton Falls, Tarana and the Muttons home and shop on the Vale Road, South Bathurst. Another cousin Kerrie had previously meet Christopher Stewart, so Vicki and Wendy arranged to meet him on their visit.

In 2012 Jacqui Rudge decided to trace her mother's family, the Peate's. She went to the Cemetery Tour at the "Autumn Colours'. The guide was Christopher Stewart!! Jacqui asked Christopher if he knew where the grave of Lawrence Peate was located. Lawrence was a shopkeeper and broom maker, circa 1870's. Chris didn't know where his grave was, however said he had relatives who were related to a Lawrence Peate who was a broom maker. (What are the odds!!!) Jacqui and Wendy are both descendants of Lawrence Peate. One side of my relatives found the other side at the Bathurst Cemetery!!!!

In July 2012, the connection got together at Abercrombie House for Christmas in July. Wendy's grandmother Ethel Peate (nee Stewart) worked there as a maid circa 1918, then it was called Stewart's Mount. For Wendy the place has a special feeling, as does the City of Bathurst. Wendy's grandfather Alfred Peate thought there was no other place on earth!!

Jacqui and Wendy share a strong passion for their Peate heritage, so much so that they have organised a "Peate Plaque" to be placed on the Heritage Wall. The unveiling will happen in 2015.

Wendy is very happy to have found so many relatives and to be reconnected with Bathurst.