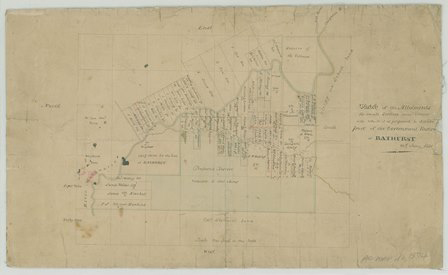 The first Europeans, or new colonials, who walked across the Bathurst plains were members of Assistant Surveyor-General George Evans' party which had set out from Sydney in November 1813, walking in the footsteps of Blaxland, Lawson and Wentworth, then continuing onward to investigate the possibility of building a road over the Blue Mountains.

In his journal Evans records the bounty of fish found in the waterways encountered throughout the expedition.

'Nothing astonished me more than the amazingly large fish that are caught; one is now brought to me that weighs at least 15lbs...' Friday December 10th, 1813.

He writes of the journey's early days spent entangled in the mountains' thick forests, of the stunning vista of the valleys on the other side (west) of the mountains, and the fertile lands which he felt would be most suitable for sheep grazing.

On December 21st 1813 George Evans surprised a small group of Wiradjuri women and children who were likely seeking water from the river. He notes that the women and children were frightened and trembling at the sight of the explorers, but after some good humoured interaction, they were less fearful. This is the first recorded meeting between Europeans and the people of the Wiradjuri nation.

Evans and party returned to Sydney by end of December 1813 and eagerly informed Governor Macquarie of the beauty and potential of the Bathurst plains.

Evans' glowing accounts of the discovered lands and the newly named Macquarie and Lachlan Rivers encouraged Governor Macquarie to commission William Cox to build a road from Emu Ferry to the Bathurst plains.

Cox set out on his journey from Sydney in 1814, with thirty convicts and eight soldiers to construct a new track terminating on the banks of the Macquarie River. In just six months they built 101 miles (163km) of road through rugged mountain country, constructing over a dozen bridges and splitting hundreds of posts and rails. Evidence of the work completed by these men can still be seen today on the descent from Mount York.
source: Bathurst 2795, Bathurst Regional Council, 2011, Land and Property Information 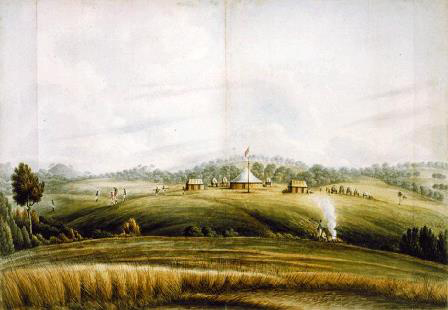 On completion of Cox's road across the mountains, Governor Lachlan Macquarie lost no time in travelling to the much-talked about Bathurst plains, boasting the river named in his honour.

Accompanied by Mrs Macquarie, staff and soldiers, the governor set out from Sydney in late April 1815, reaching his destination within ten days. The party camped on the banks of the Macquarie River for six days and on Sunday May 7th 1815 the whole company was ordered to gather around the flagstaff on the western bank for the raising of the Union Jack. It was on this site that the intended township of Bathurst was named, after the Secretary of the Colonies, Earl Bathurst.
source: Bathurst 2795, Bathurst Regional Council, 2011, Land and Property Information