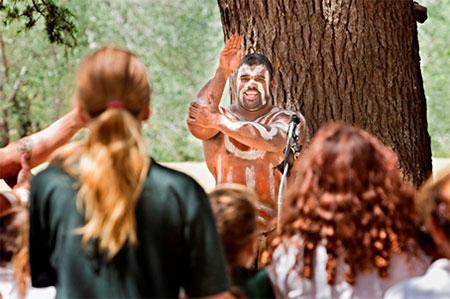 The Wiradjuri people are the traditional custodians of the land on which Bathurst now resides and as such are the foundation stone for the story of Bathurst; their history and culture are integral to the story of our community and our bicentenary celebrations.

The Wiradjuries of Dulin, the Goanna Totem, are the people of the three rivers - the Wambool (Macquarie), the Calare (Lachlan) and the Murrumbidgee. They have lived in these lands and along these rivers for more than 40,000 years. It is estimated that 12,000 people spoke the Wiradjuri language prior to white settlement. Differences in dialect existed in some areas, including around Bathurst and near Albury. The Bathurst Wiradjuri were the most easterly grouping of the Wiradjuri nation.

The Wiradjuri lived in extended family groupings of around thirty men, women and children, moving between different camp sites across their traditional lands, which covered an area of approximately 40 miles (or 64 kilometres) square. They made periodic journeys throughout this well-watered country around the Wambool River.

An information booklet introducing the history and culture of the Wiradjuri has been developed through collaboration with key Wiradjuri organisations in the Bathurst region and is available from the Bathurst Visitor Information Centre ph: (02) 6332 1444.