Edward Combes - A Politician and a Painter 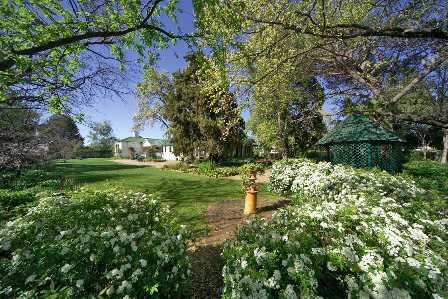 The painting "Figure in Landscape" by the artist Edward Combes had hung for many years over the bed of Miss Traill's mother, Mrs. Gertrude Traill, and until recently the significance of the painting to the area was not known.

When visiting Miss Traill's house recently, two central west couples who one paintings by Combe's explained his considerable connection and contribution to the area.

Edward Combes was the original builder and owner of Glanmire Hall. He was a long serving member of the NSW Parliament as the Member for Bathurst, Orange and East Macquarie. Edward as acknowledged in 1881 by the bulletin, as 'the best amateur painter in Sydney'.

"We love to share the history of the house and its collection - and welcome visitors to the house on any of the open days", said Iris Atkinson, Miss Traill's House Collection Co-ordinator.

Edward was born on 6 Sept 1830 in Wiltshire England, studied at the Conservatoire des Arts et Metiers, Paris. He migrated to Victoria in 1815 but returned to Paris in 1855 for further study and in that year was appointed Commissioner to the Paris International Exhibition and again in 1878. He was an engineer, pastoralist, politician and artist.

Whilst in England he married Harriette Hare of Exeter in 1856, they returned to NSW and eventually settled in Bathurst where he bought land and built Glanmire Hall.

Through his efforts, the Government in 1874 granted 500 pounds towards the formation of an art gallery for students, later to become the Art Gallery of NSW.

Combes died at Glanmire Hall on 18th October 1895 and was buried in the Waverly cemetery. A portrait bust of Combes by Simonetti is in the Art Gallery of New South Wales.

Miss Traill's House at 321 Russell Street was bequeathed to the National Trust in 1976 and is open for tours on Saturday, Sunday and public holidays from 12.00noon - 3.30pm. More information is available by visiting https://www.nationaltrust.org.au/places/miss-traills-house/