Lindsay McKellar has been a resident of Bathurst his whole life, and for him there was one day that stood out. On 12 February 1954 Queen Elizabeth 11 and her husband Prince Philip visited Bathurst. Although the visit was only 75 minutes, the newspapers called it ‘Bathurst’s Greatest Day’. The Bathurst ‘National Advocate’ reported “…in that period Bathurst had made History, and an achievement which will never be forgotten in the hearts and minds of those who so wildly acclaimed the Royal visitors”.

More than 80 thousand people gathered in Bathurst to welcome the Queen and the Duke of Edinburgh. It was the greatest crowd the city had ever known.

On the day of the Royal visit Mr McKellar, aged 19, was helping his parent with the Bathurst High School Auxiliary stall at the Showground by selling soft drinks. Mr McKellar said “I managed to disappear to take photos of their (Royals) car travelling into town near the Denison Bridge and the welcome gates that had been erected”.

People arrived in Bathurst on Thursday, and by midnight about 4,000 of the vanguard were present. Scores of people wrapped in blankets, slept on King’s Parade in front of the dais where the civic reception was later held.

“It is hard to imagine what that visit meant to the people. Towns like Orange and Blayney were almost deserted as the enthusiasm to see the Royal couple swept the district”

“It was an emotional and an amazing day for me and thousands of others. My future wife and sister had a great view as members of the Girl Guide group assembled at the showground”

The welcome arch that was crafted for the visit said “God Bless the Queen” and “Welcome to Bathurst”. 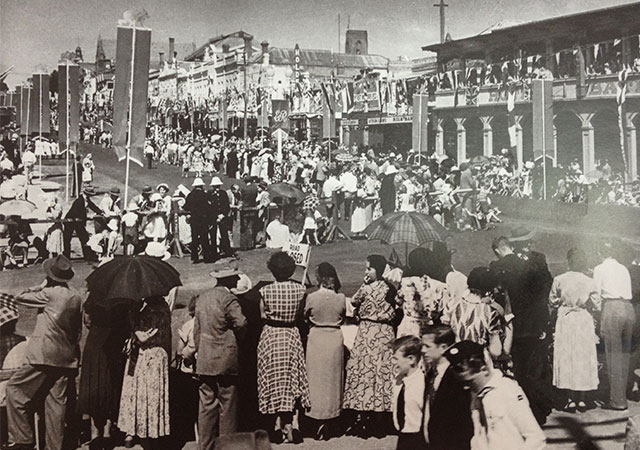