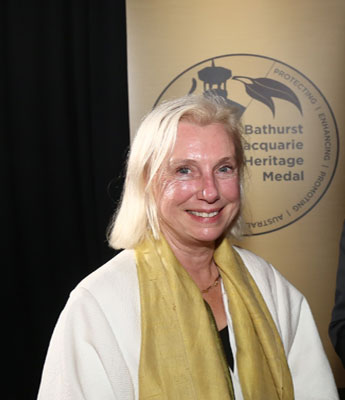 The recipient of the 2016 Bathurst Macquarie Heritage Medal, Professor Robyn Sloggett AM has been described by her peers as a contemporary hero of understanding and protecting cultural heritage both in Australia and internationally.

The Medal was first awarded in 2015 as a Bathurst bicentenary legacy, recognising an individual who demonstrates a significant contribution to the protection or promotion of Australia’s built, social, cultural or environmental heritage.

Cr Rush said Bathurst is committed to valuing the protection of its heritage and the Bathurst Macquarie Heritage Medal was created to promote these values to a national audience.

“Robyn represents all that the Bathurst Macquarie Heritage Medal stands for, an individual who demonstrates a significant contribution to the protection of Australia’s heritage.

“Her work in heritage conservation, and in particular her work to assist remote Indigenous communities to work on heritage and art conservation issues has resulted in an exchange of knowledge between conservators in large institutions in southern Australia and senior Indigenous knowledge holders and practitioners. Robyn has been responsible for developing partnerships in training, collection management, preservation and digitisation of artist’s works and documentation.

“Robyn’s research is grounded in the belief that strengthening research capacity in heritage conservation and mentoring the next generation of researchers is essential to the conservation of culture across Australia,” Cr Rush said.

Prof. Sloggett said it was a privilege to have been nominated for the Bathurst Macquarie Heritage Medal and there was nothing more she would rather be doing in than helping people share their stories and their heritage, and secure it for the future.

She said she intends to use the award to promote a more coordinated and nationally integrated approach to heritage and contemporary conservation.

Prof Sloggett is the Director of the Grimwade Centre for Cultural Materials Conservation at Melbourne University where she manages the diverse conservation, teaching and research programs of the Centre.