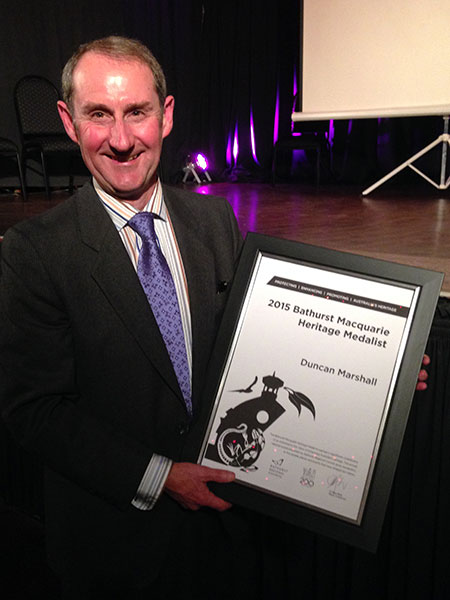 Heritage conservation consultant and immediate past Chair of the ACT Heritage Council Duncan Marshall has been announced as the inaugural winner of the Bathurst Macquarie Heritage Medal at a dinner in Bathurst this evening.

Four nominees from three states were nominated for the inaugural national $25,000 award.

Mayor of Bathurst Cr Gary Rush said Council created the award to recognise the protection, enhancement and promotion of Australia's heritage and help raise awareness about the immense value of celebrating and acknowledging the people, places and events that have shaped us today.

"All four nominees have made an outstanding contribution to protecting, promoting and enhancing Australia's heritage. The judges found the selection process incredibly challenging and all nominees must be commended for the work they do.

"Duncan Marshall, as inaugural winner of the Bathurst Macquarie Heritage Medal reflects the values of the award.

"He has been described by his peers as a supreme professional, a forward thinker, who has made a significant and lasting contribution to heritage conservation, principles and practice through hundreds of projects and publications over 30 years.

"As a leading heritage conservation consultant he has written hundreds of publications and speeches and delivered projects locally, nationally and internationally on World Heritage, conservation principles and practice, heritage identification and assessment, conservation planning and moveable cultural heritage.

"As Chair of the ACT Heritage Council he has gone above and beyond the expectations for a voluntary role. Duncan is a worthy winner of the inaugural Bathurst Macquarie Heritage Medal," Cr Rush said.

In accepting the award Mr Marshall said he was delighted and grateful to win a very special award, the inaugural Bathurst Macquarie Heritage Medal.

Mr Marshall praised Bathurst for its vision and commitment in creating such an award.

"It is heartwarming and humbling that a local community should care about national heritage," he said.

Mr Marshall said each nominee has made a tremendous contribution to heritage over years and decades.

He said tonight was a celebration of the achievements of all the nominees and many others in the room and their contribution to heritage.

To keep up to date with information about the Bathurst 200 celebrations, visit bathurst200.com.au