Bathurst Says No to Domestic Violence 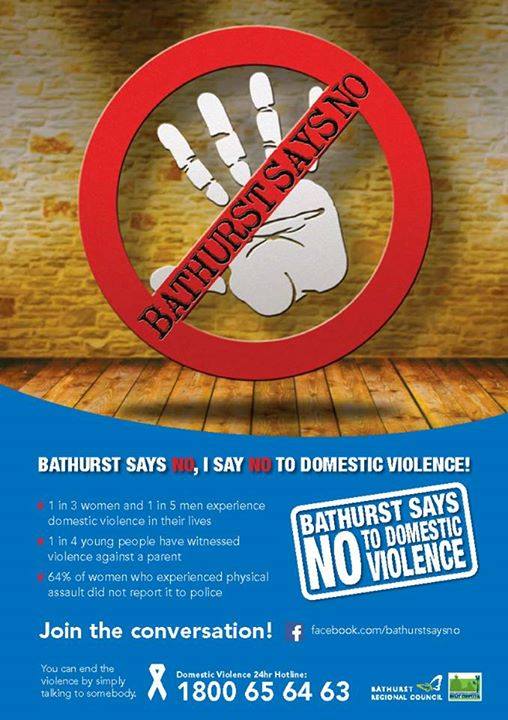 In 2015, the Bathurst Community Safety Committee, in conjunction with key community stakeholders worked on increasing the awareness of Domestic Related Violence and its impact on the local community.

The ‘Bathurst Says No to Domestic Violence’ campaign was launched in November 2015.

The campaign is focused on members of the community taking the pledge to say no to domestic violence. White Ribbon Australia came on board as a supporter of the initiative, and Bathurst Mayor Councillor Gary Rush was inducted as a White Ribbon Ambassador.

The ‘Bathurst Says No to Domestic Violence’ Facebook page currently has over 700 likes, and hundreds of pledges from members of the Bathurst Community. The ‘DV Pledge Booth’ has
been set up in various locations around Bathurst including Bathurst City Centre, Bathurst CSU Campus, Bathurst Regional Council Civic Centre and Works Depot, Stockland Bathurst, Bathurst Memorial Entertainment Centre and Denison College Kelso High Campus. Community members are able to pledge their support by having their picture taken whilst holding up the campaign poster, with the images then posted to the DV Facebook page. If you wish to pledge your support, please
visit the DV Facebook page and follow the instructions on the ‘Take the Pledge!’ tab.

In 2016 The Bathurst Community Safety Committee continues to increase awareness and expand the ‘Bathurst Says No to Domestic Violence’ campaign, encouraging all members of the community to pledge their support.